Theyyam
Theyyam (Malayalam: തെയ്യം‍) or Theyyattam or Thira is a popular Hindu ritual form of worship of North Malabar in Kerala state, India, predominant in the Kolathunadu area (consisting of present-day Kasargod, Kannur Districts, Mananthavady Taluk of Wayanad and Vadakara & Koyilandy Taluks of Kozhikode of Kerala state. As a living cult with several thousand-year-old traditions, rituals and customs, it embraces almost all the castes and classes of the Hindu religion in this region. The performers of Theyyam belong to the indigenous tribal community, and have an important position in Theyyam. This is unique, since only in Kerala, do both the upper-caste Brahmins and lower-caste tribals share an important position in a major form of worship. The term Theyyam is a corrupt form of Devam or God. People of these districts consider Theyyam itself as a God and they seek blessings from this Theyyam. A similar custom is followed in the Tulu Nadu region of neighbouring Karnataka known as Bhuta Kola


Vayanatt Kulavan
Vayanatt kulavan can be considered as one of the most furious and acrobatic theyyams which are performed. The ferocious state is expressed in a comical way. Theyyam is usually performed with a bit of holy alcohol called Toddy. Vayanatt Kulavan is believed to be originated when Lord Shiva and Parvathi took the form of Hunters. The tale of origin is associated with Lord Shiva and Parvathy. Once they were travelling through forest called madhuvanam. Madhu means Toddy(Alcohol) and Vanam means Forest. Lord Shiva used to intake the toddy that used to drip from the trees(During those days, toddy used to drip from the bottom of the trees). Parvathy disliked this habit. One day when Shiva went for the intake, he found that the toddy which used to drip from the bottom had gone upwards. This agitated him. Shiva became furious. This trick was infact done by Parvathy Devi. In order to fetch the toddy, Shiva created a devine person, by tapping on his thigh. This devine person is considered as the son of Shiva, Son was assigned the taks of fetching toddy from top of the tree. He got on top of the tree and started having the toddy himselves. Lord Shiva warned him not to have toddy from madhuvanam. The son ignored the warning and continued the consumption. Lord Shiva became angry with this and cursed the son to go blind. Later he was provided with "False Eyes" and sent to earth to protect the people. It was in wayanad where he first descended on the way to earth. He was thus called Wayanad Kulavan OR wayanatt kulavan. Wayanatt kulavan who was destined to fetch toddy for Lord Shiva had a lot of folllowers and theeya caste seems to be originated in this fashion. Wayanatt kulavan theyyam is usually performed during the night time with the aid of light generated by lighting the dry coconut leaves torch(Chootta or Choott) During the first journey of Wayanatt Kulavan theyyam, the torch gets lit off and theyyam threw the torch as well as the silver eye(False eye). The place where the torch and the silver eye fell is now a holy place and Wayanatt kulavan theyyam is usually performed yearly at this place. Hunting is an inevitable act in Wayanatt Kulavan theyyam performance. 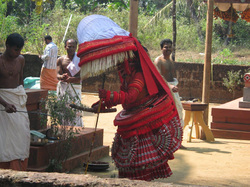 The story of origin goes in this fashion. A person called Mannappan who hail from mangatt, in kannur district and belong to theeya caste, later became devine and peroformed as theyyam widely known as kathivanoor veeran. Mannappan was born to kumarappan and chakky couples. The naughty nature of mannappan lead him to be a headache for the family. One day mannappan was forced to exhile from his home and travel towards the Kodague currently know by the name Coorg.
Though he had setout along wtih friends, they intoxicated him and thus Mannappan was set alone. Mannappan, with the help of a female called Chemmarathy found his relative in Coorg and got settled there.

Mannappan started living by farming there and became an abled youth. When it became time for the marriage, mannappan decided to marry the female whom he met on his way to Coorg, called Chemmarathy. Soon, they got married. Mannappan used to travel long distance in pursue of the farming jobs he had. Chemmarathy used to argue with her husband when he became late to home.

One day warriors in Kudag area started war on the area. Chemmarathy challenged the strength of Mannappan to fight the warriors. She openly announced that Mannappan would not be able to survive a battle. Mannappan was an abled warrior. He set out for the war. Though bad omens were already started showing right from the time he set out. Inspite of all those, Mannappan continued his way to battle field. Mannappan fought with all his expertiese and the enemies fled. On his way back, he found that one of his fingers and finger ring were lost in the battle field. Loosing them was a smash for the pride, Mannappan went back to battle field to fetch them back. Kudag warriors were hiding in the battle field and they adopted unfair means to end Mannappan. He was killed in the battle field by un ethical manner. Mannappan's relatives gathered and decided to burn him in the graveyard. Chemmarathy who could not bear the demise, gave her line along with the burning body of Mannappan. 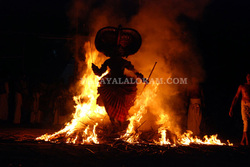 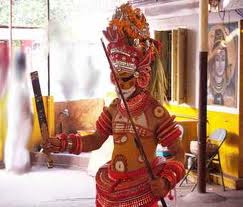 Sree Muthappan (Malayalam: ശ്രീ മുത്തപ്പന്‍) is a folk Hindu deity commonly worshiped in North Malabar region of Kerala and Coorg region of Karnataka, in India. Muthappan and Thiruvappan, as a process of Sanskritisation, he is considered to be a manifestation ofShiva and Vishnu. Worship of Muthappan is unique in that it does not follow the SatvicBrahminical form of worship, as in other Hindu temples of Kerala. The main mode of worship is via a ritual enactment of Muthappan, performed daily at the Parassinikadavutemple. Fish and toddy is used as an offering to Muthappan, and people of all castes, religions and nationalities are permitted to enter the temple and take part in the worship.

Muthappan is the principal deity in the ritualistic Theyyam dance (Muthappan Theyyam) performed in the famous Parassinikkadavu temple. The ritual performers of Muthappan Theyyam belong to the Vannan community of Kerala. The puja rituals and rites for Muthappan are performed by the Thiyya community.

Kandanar Kelan was a yesteryear warrior.The story goes that once Kandanar Kelan was out hunting in the forest when suddenly the forest caught fire.Finding no other means of escape he climbed a tree.This tree was also the home of two snakes.The fire consumed the tree,the snakes and Kandanar Kelan.Vayanat Kulavan,another warrior god was passing by the burnt forest when he saw the image of Kandanar Kelan in the ashes.With his bow he traced out Kandanar Kelan and gave him life.The theyyam is an embodiment of the Kandanar Kelan and how he shows his anger towards the fire for burning him up.The theyyam very prominently has two snakes drawn on his chest that depict the snakes that perished with him in the fire.Kandanar Kelan runs through the fire dressed in his silk and wearing metal anklets,perhaps the only theyyam to do so.The rest of the theyyams who interact with fire like the Uchitta bhagavathi wear costumes made of tender coconut leaves.Kandanar Kelan is performed yearly at the Nambiar Makkuni Tharawad at Azhikode,Kannur district.Regularly, the Kandanar Kelan Theyyam is performed as a part of the Vayanat Kulavan Theyyamket Utsavam. There was an interesting ritual in olden days. Hundreds of hunters would go to the nearby forest and capture large numbers of animals. The hunted animals were cut into pieces in front of the Kandanar Kelan Theyyam. The Marapilarkal ritual attracts thousands of people. The Theyyam then would leap over a huge pyre. 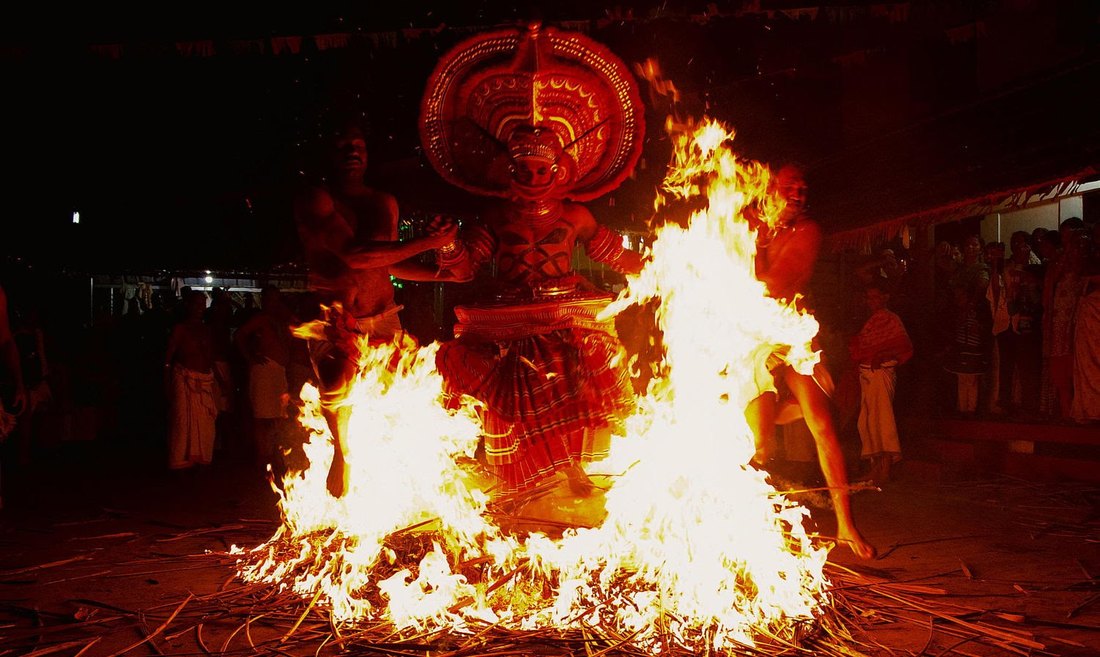