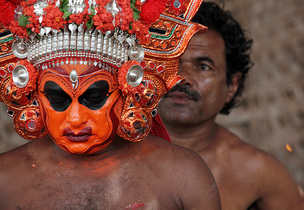 NORTH MALABAR:(malayalam-ഉത്തര മലബാര്‍/വടക്കേ മലബാര്‍))))))0,0 ) is a historic as well as geographic distinction in India used to refer the area covering; present Kasaragod and Kannur Districts, Mananthavady taluk of Wayanad District and Koyilandy & Vatakara taluks of Kozhikode District in modern Kerala and the entire Mahé Sub-Division of Union Territory of Pondicherry.
Majority of North Malabar (except Mahé) remained as one of the two administrative divisions of Malabar District (an administrative district of British India under Madras Presidency) till 1947 and later part of India's Madras State till 1956. Mahé remained under French jurisdiction until 13 June 1954. On November 1, 1956, the state of Kerala was formed by the States Reorganisation Act merging the Malabar District, Travancore-Cochin [excluding four southern taluks, which were merged with Tamil Nadu], and the of Kasaragod taluk of South Kanara District.
The area of North Malabar begins at Korapuzha in the south and ends at Manjeshwaram in the north of Kerala and traditionally comprises erstwhile princely principalities and fiefdoms of Kolathu Nadu, Kadatha Nadu and southern parts of Tulu Nadu.
Even during ancient and early medieval periods, North Malabar retained her distinct political identity. Cheras at no point of time could impose their full control on this zone and in many sense have features which set it apart from rest of Kerala culturally.